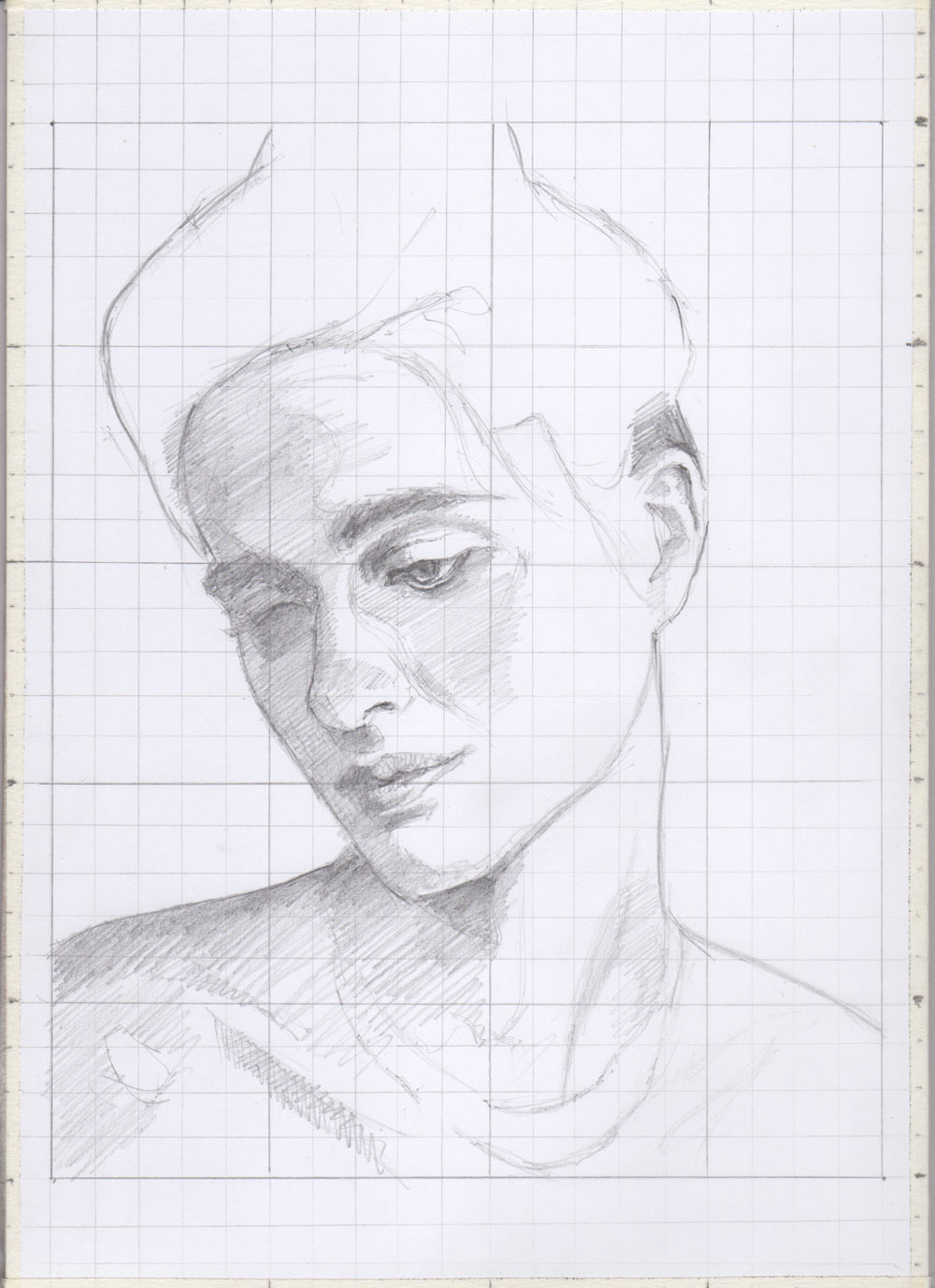 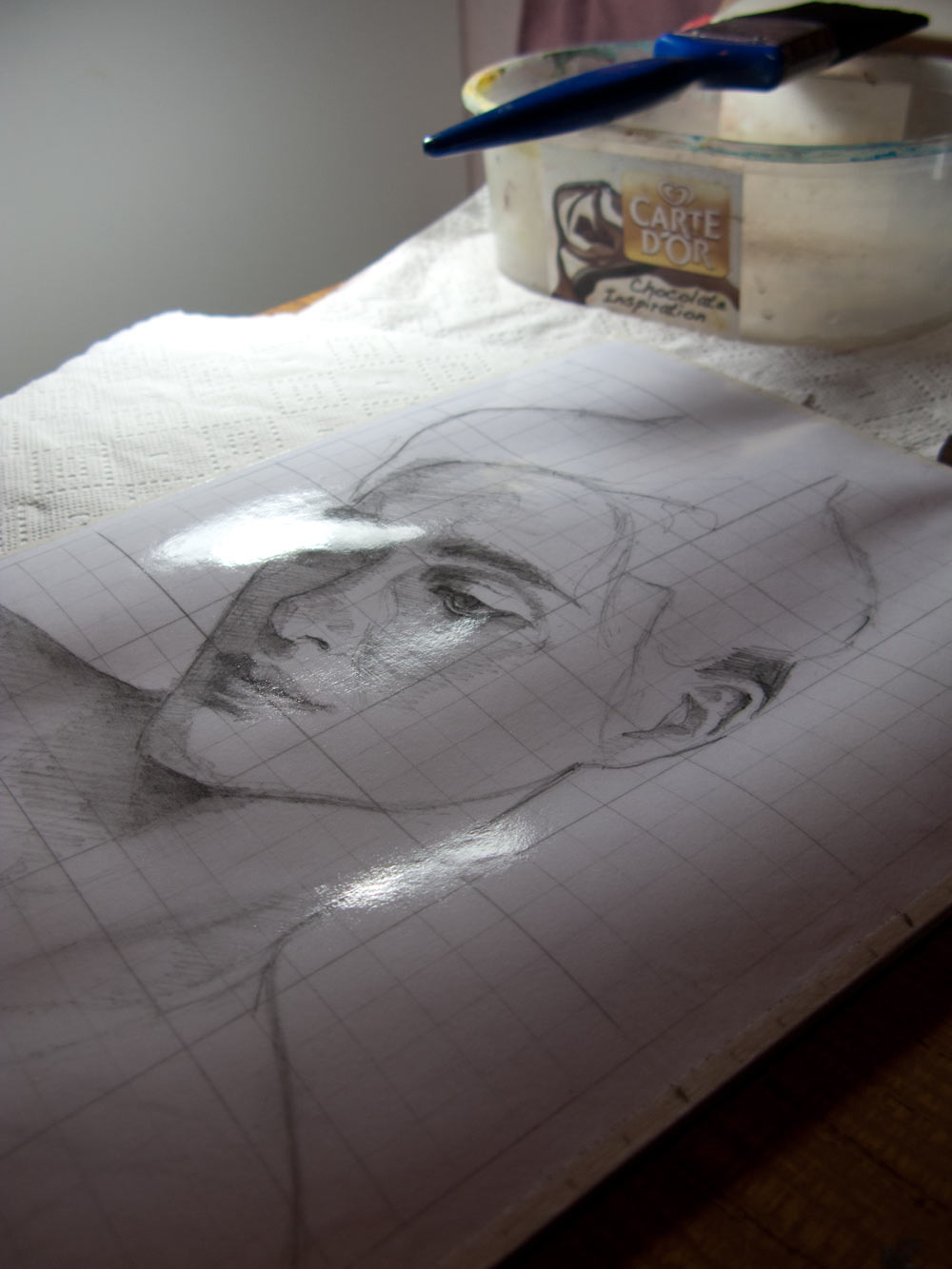 I wanted to practice laying down oil paint in smooth, even blends, like in those classic pictures of old with their ceramic finish and no visible brush strokes. Bouguereau could do it, so why couldn’t I?

To practice this, I decided to do a straightforward copy in oils of a photo by Jérôme Bonnet of Loulou Robert. I liked the lighting and the classical pose. In the rush to get painting, I botched the initial lay-in, and after a number of failed attempts I decided to bypass the whole drawing phase and copy the photo directly using a grid. The grid was drawn on Bristol illustration board and a matching grid was overlaid on the on-screen photo reference. The tight grid ensured that the freehand pencil drawing would never stray too far. It was a shortcut to get to the fun part of the painting. I would worry about becoming a decent draughtsman some other time.

As I found out later, acrylic matt medium would have provided more tooth. The gloss surface is very slick and doesn’t grab the first oil paint layer; the brush tends to smear the paint around rather than being drawn evenly from the bristles by the tooth of the surface. 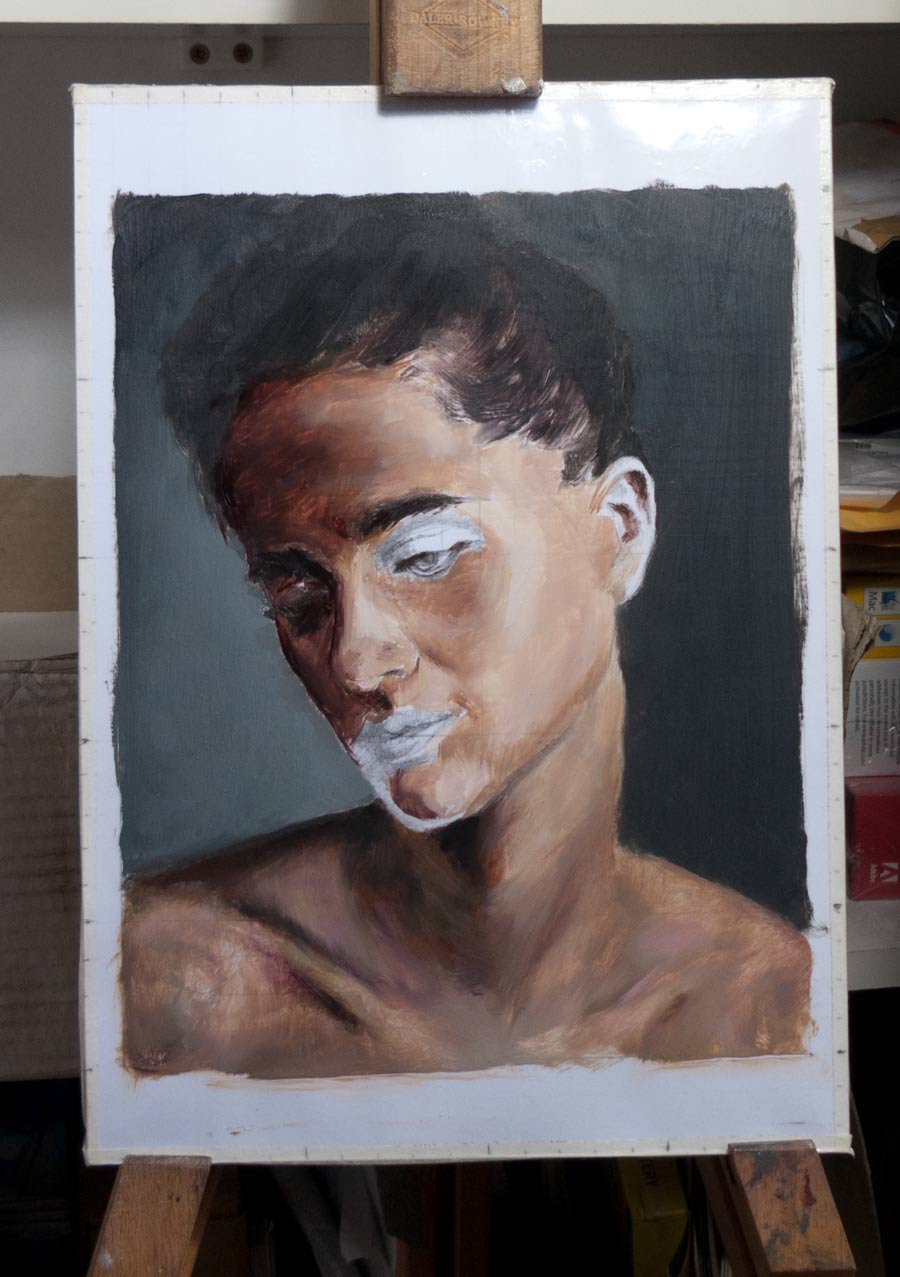 And this experiment brought to an end to any thoughts as to whether drawing a grid is ‘cheating’ or not. The pencil drawing quickly disappears below the first thin layers of paint, the guidelines are gone and you come face to face with the limits of your own ability to draw. I found that hairlines would go up, jawlines would go down, eyebrows would shift around. They were small inaccuracies, but they mounted up, until the face was no longer a recognisable likeness (or in this case, even recognisably female).

Successive layers of paint were easier to paint on than first slick acrylic layer. I used some Galkyd Slow Dry medium to smooth out the blends, but probably overused it as sometimes the paint would bead-up. The hoped-for ceramic finish began to look more like the surface of the moon after the repeated attempts to model forms and match colours. 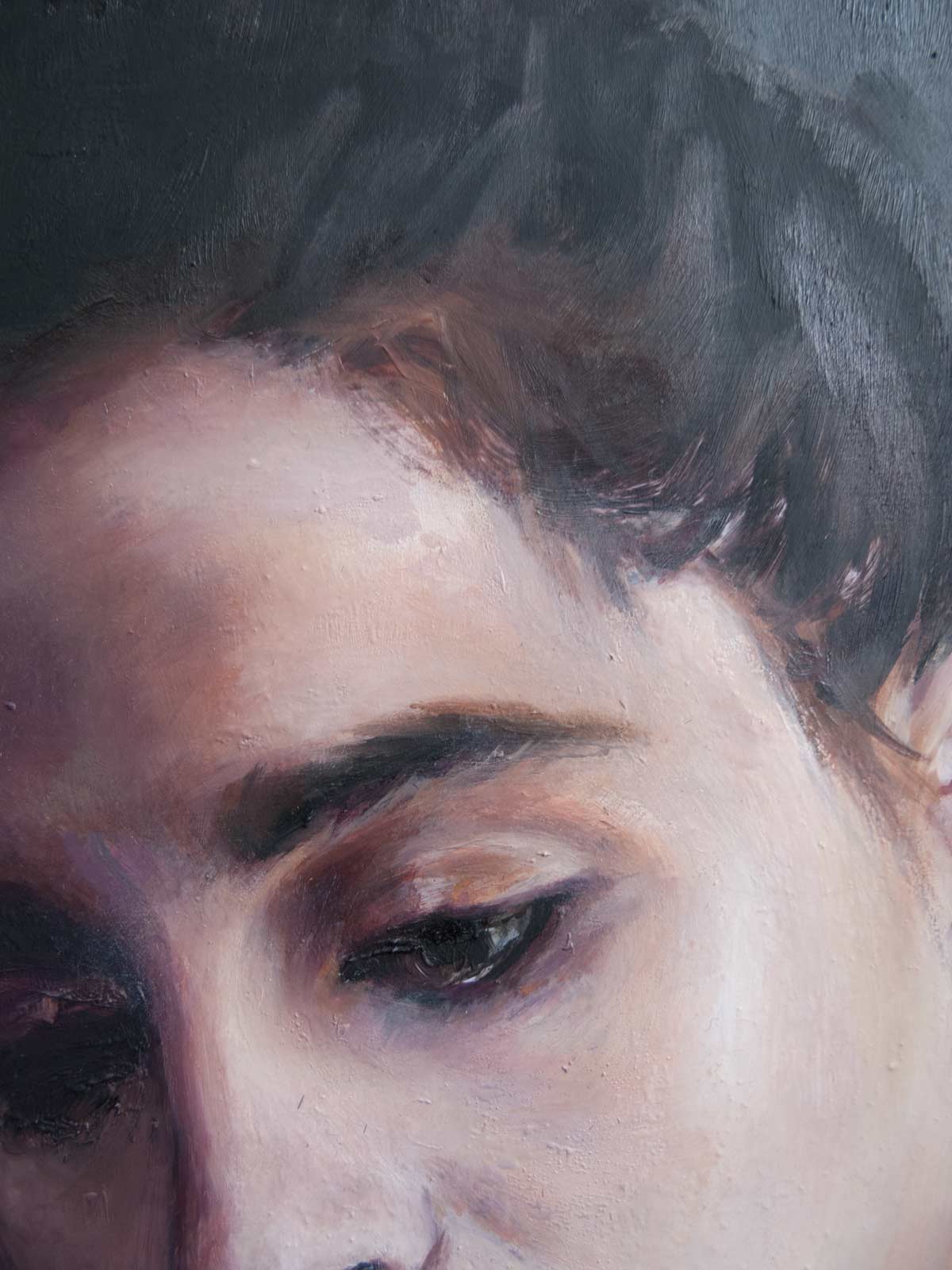 I ended up printing out the reference photo and trying to copy it sight size. I was aiming for a close match to the original, both in layout and in colour. Of course, this meant that the best this painting would ever be is a replica of a printed photo. 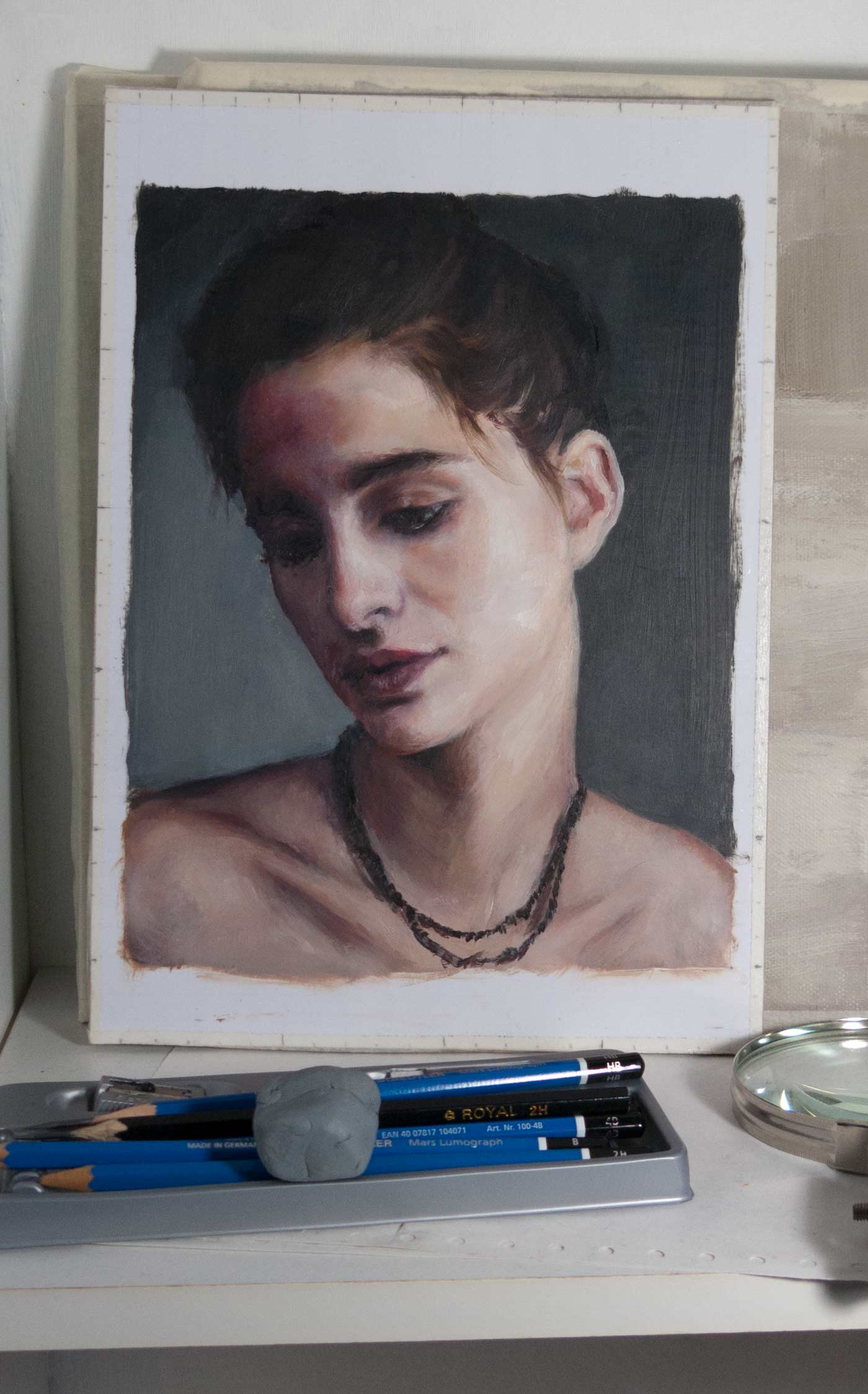 Although this is necessary practice that highlights the many difficulties in handling oil paint, I’ve got to the stage where it feels like I’m trying to patch up a bad job, and I’m not sure the goal of replicating a print-out is worth aiming for. The foundations are wrong, and any improvements to the painting are mainly due to fixing mistakes rather than building up a picture with a process of progression and refinement. So, the picture remains half-finished on the shelf. I’ll take it out from time to time to experiment further or to try something new. But for the moment, I need to rip it up and start again.