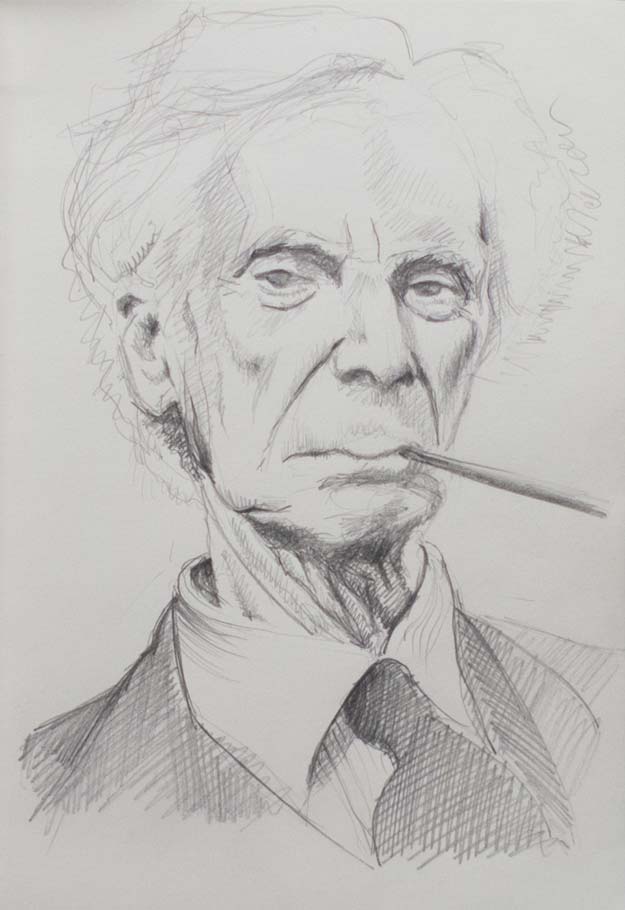 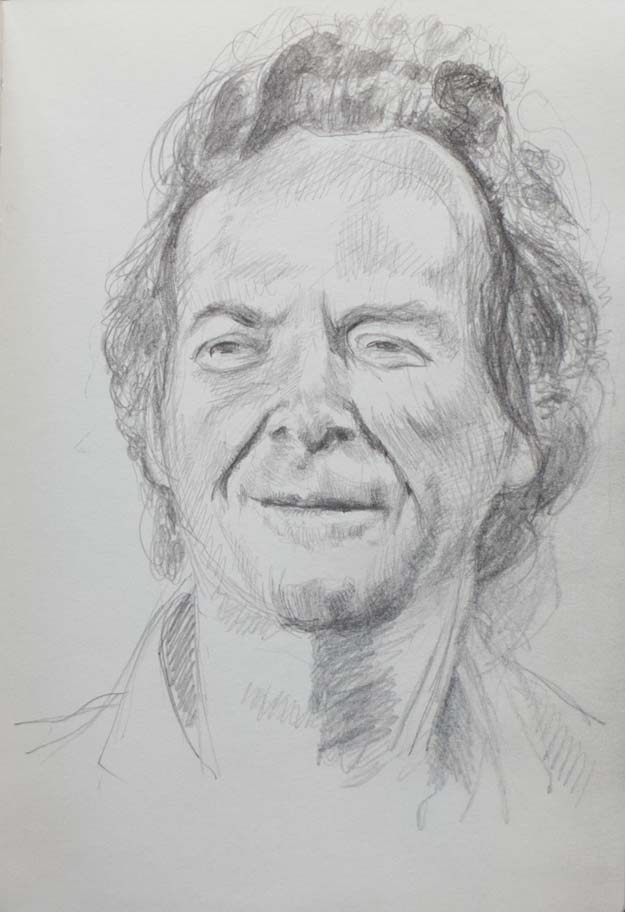 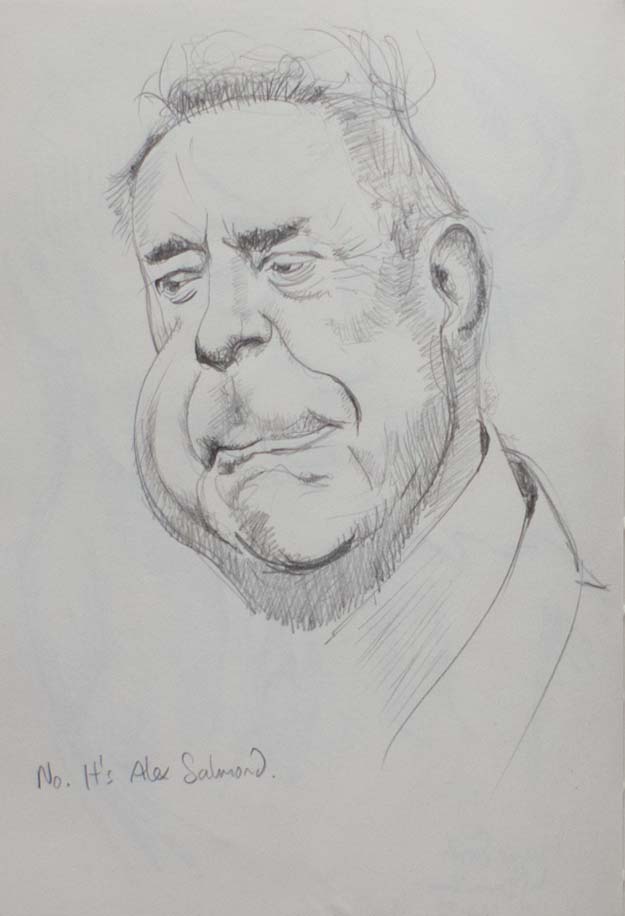 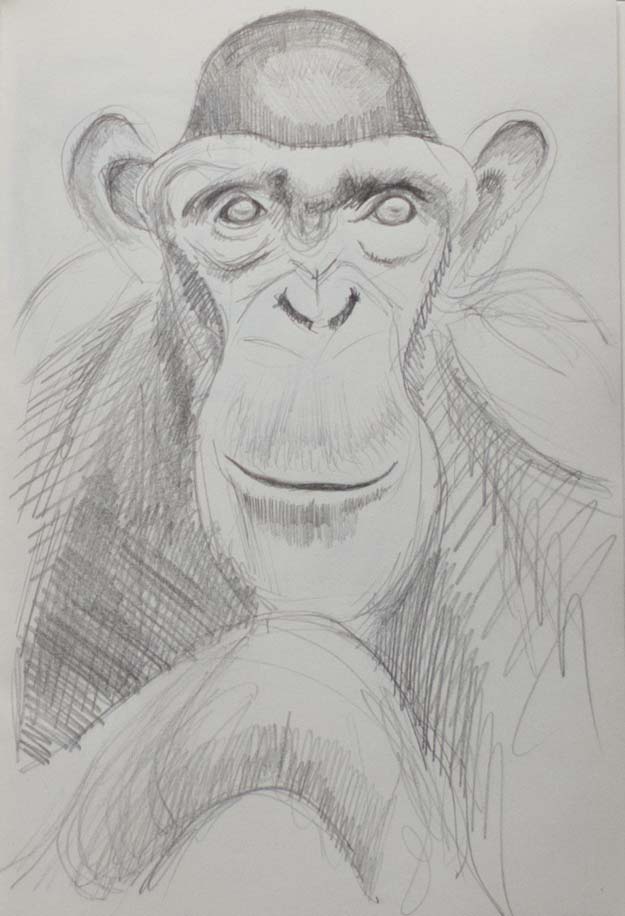 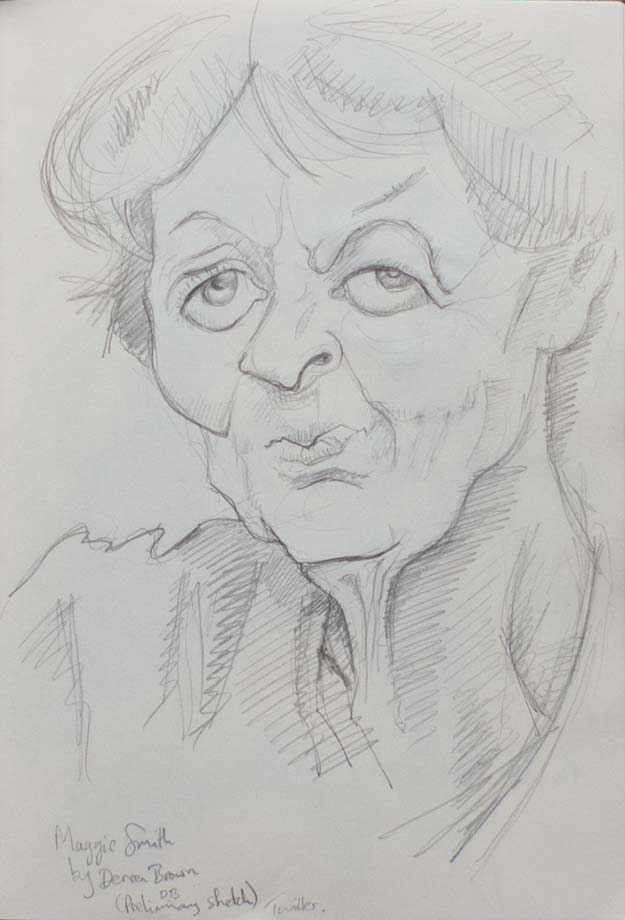 A copy of Derren Brown’s sketch of Maggie Smith 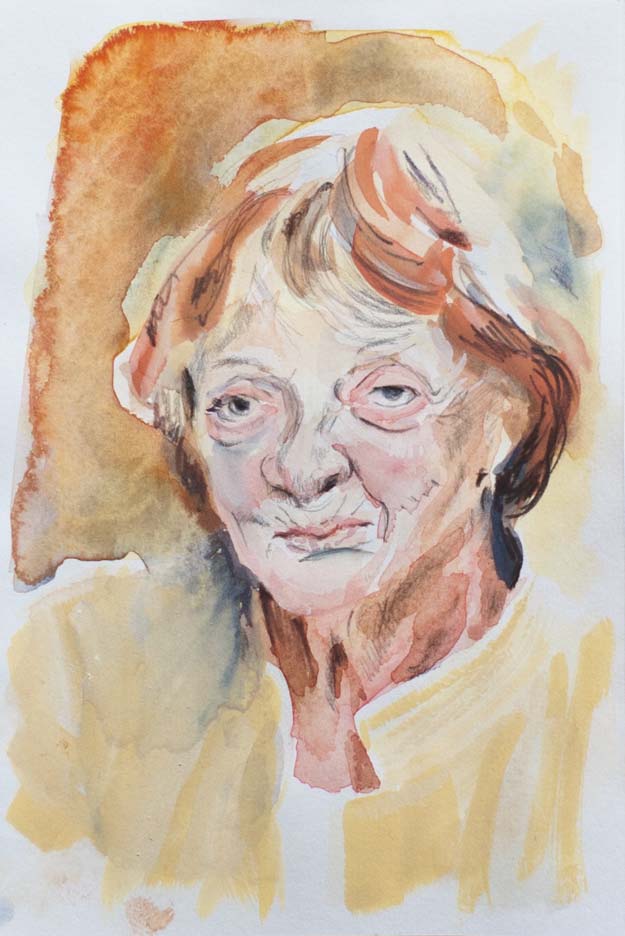 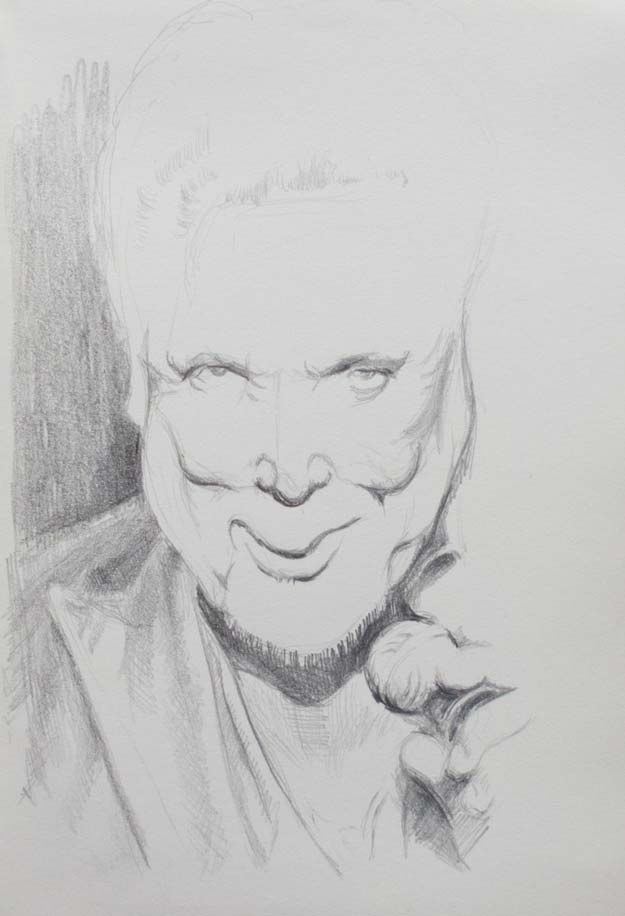 Drawing portraits has been described as making a picture of someone where the eyes aren’t quite right and the nose is in the wrong place. Well, if I’m going to get it wrong, why not really get it wrong and turn the face in to a caricature: find the features which make a person recognisable and exaggerate them.

I was inspired by seeing Derren Brown’s preliminary sketch of Maggie Smith, which I copied (above) as I found it very instructive in the way that he takes a feature, such as a cheekbone or a chin, and then sculpts and magnifies that form independently of what is really there.

I tried to do the same thing with a number of photos found on the web. Other than Alex Salmond’s enormous jowl and Bertrand Russell’s oversized collar, I found it surprisingly hard to exaggerate most features. As I was drawing, I thought I was overstating Richard Feynman’s distinctive high forehead and quizzical smiling frown, but I quickly slipped back into attempting an accurate copy. Perhaps this is a good way to draw a face: aim for an exaggeration then let the natural instinct to draw accurately tone down the caricature into a more lively portrait. 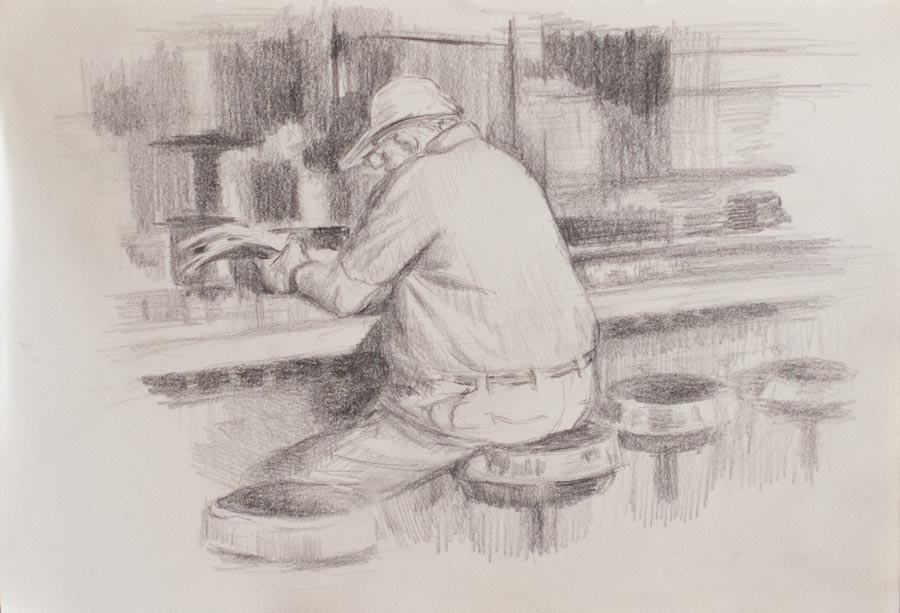 This is a copy of a painting by James Gurney which he made while waiting for his breakfast to arrive. He painted the man at the bar in about 10 minutes with the rest of the scene completed later.

It took me over an hour to do this pencil copy, sat on a sofa in the evening with the TV on in the background, enough time for half a dozen Gurney paintings. But I think I need to stop being so concerned about speed as I think that comes naturally with regular practice and knowledge of materials.

I do find myself falling back to pencil much of the time as it’s the only medium where I can quickly render large areas of tone together with areas of precision. If only it didn’t look like pencil! For a painting I still need (for now) a table, a couple of tubs of water with access to a tap for refills, kitchen roll, space for the paper, brushes and materials, and lots of time. 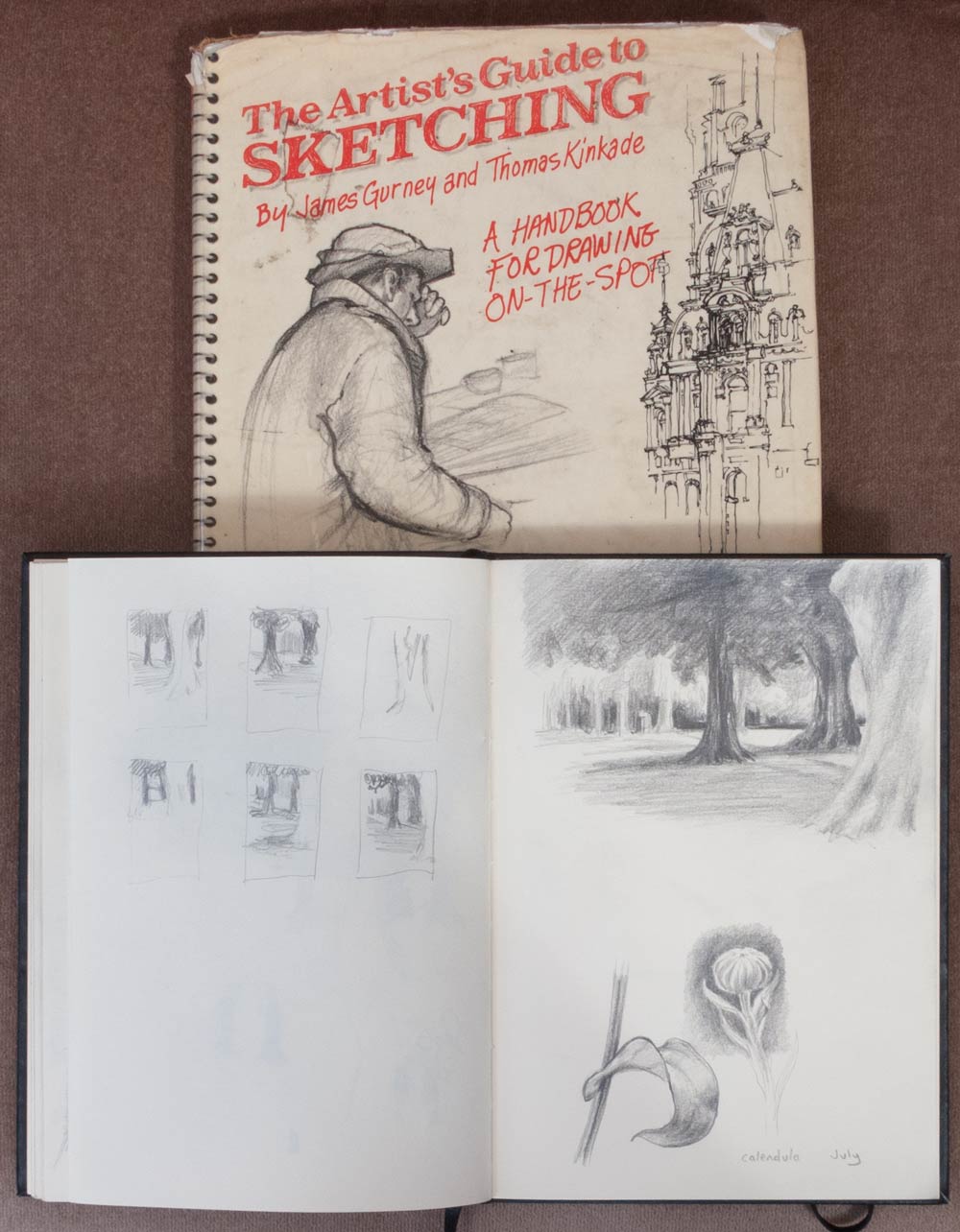 After reading Color and Light by James Gurney, I’ve been trying to track down a copy of The Artist’s Guide to Sketching, an earlier book he co-wrote with Thomas Kinkade. Unfortunately it is out of print and the second-hand prices have gone crazy. Then I remembered we still have public libraries in this country and reserved a copy for a humble pound.

One of the tips he gives is to spend some time drawing small thumbnail sketches of the scene instead of beginning the drawing right away. This gives the chance to try out different compositions and experiment with areas of focus. But for me the most useful result of making these thumbnails is that it creates enough time to look at the subject before committing to a drawing. Once I’ve decided on a subject, the urge to start sketching right away is near irresistible, with the result that the composition often suffers. Just looking at the scene without drawing anything I find very hard, so scribbling thumbnails satisfies the need to be making marks immediately. By creating a number of empty rectangles you’re forced to reassess the scene a number of times, giving the eye a chance to discover the important features while giving the impatient hand something to do.

In the sketch above, I was drawn to the shapes between the three trees in the foreground, but only after the time spent drawing thumbnails did I realise that the empty sunlit space in the middle distance to the left, with the path leading off through the avenue of trees, is what attracted me to the tree shapes to begin with. 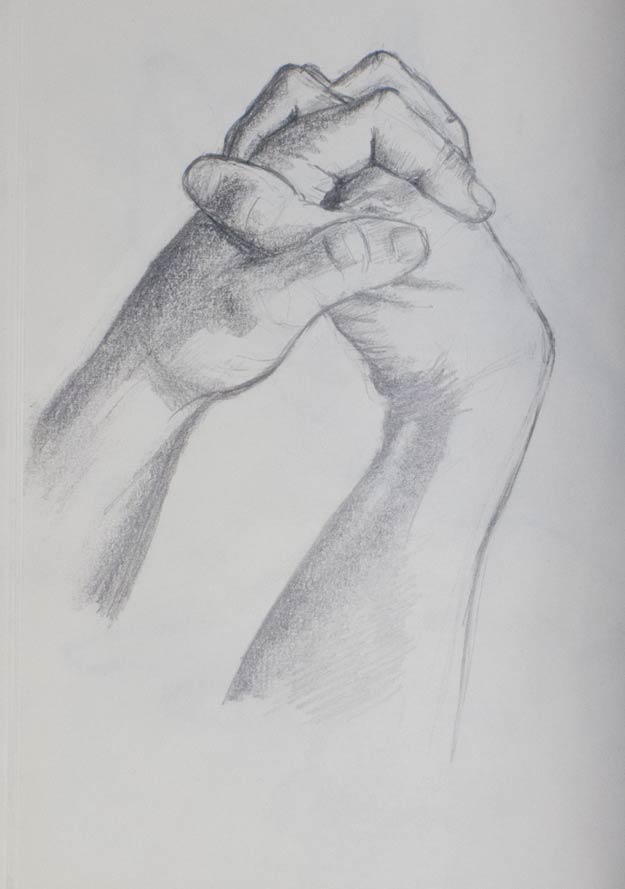 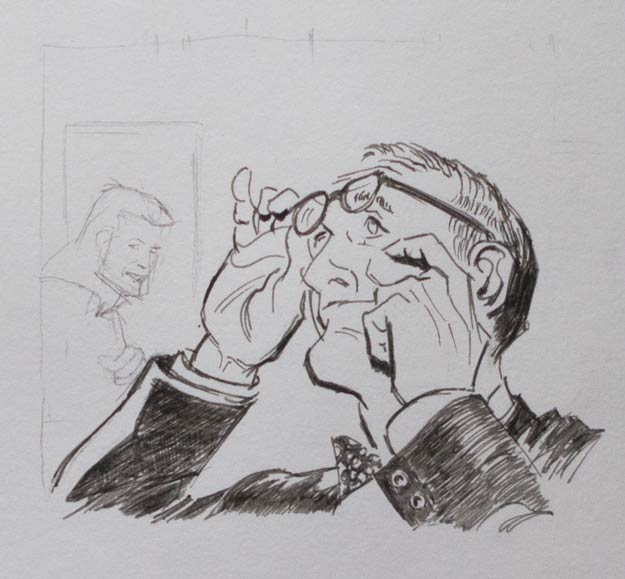 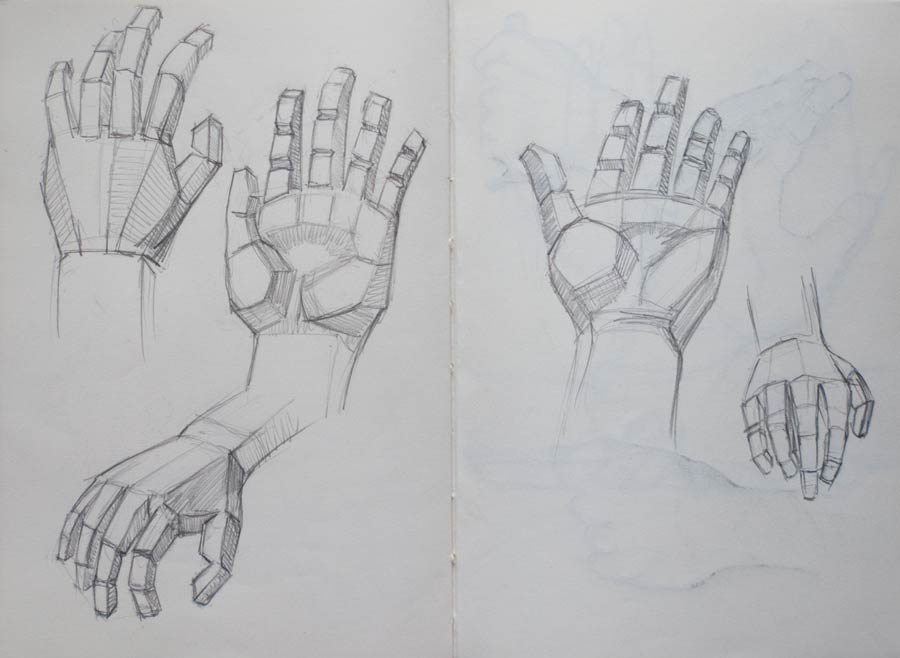 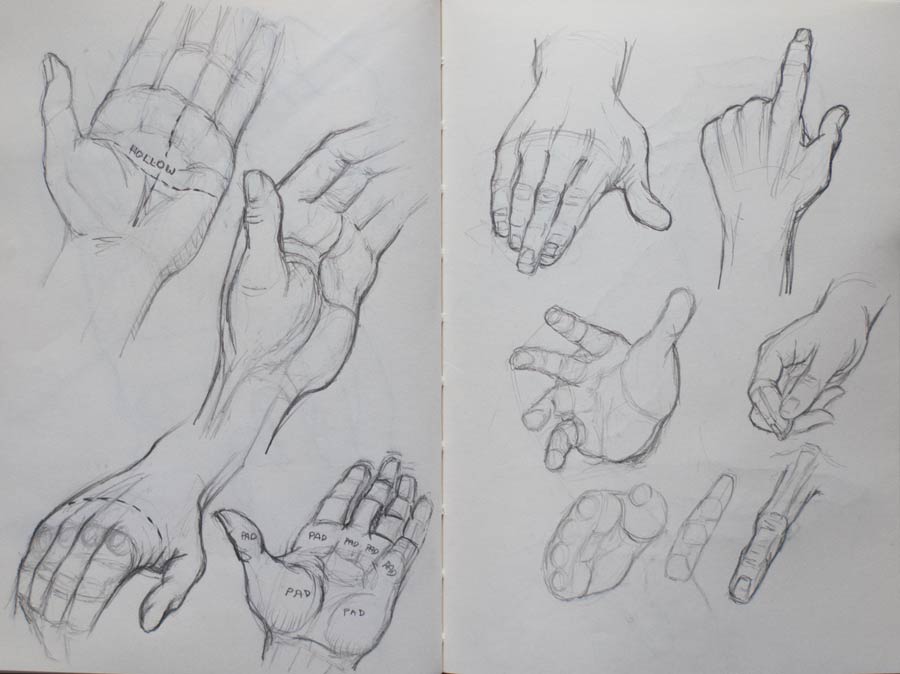 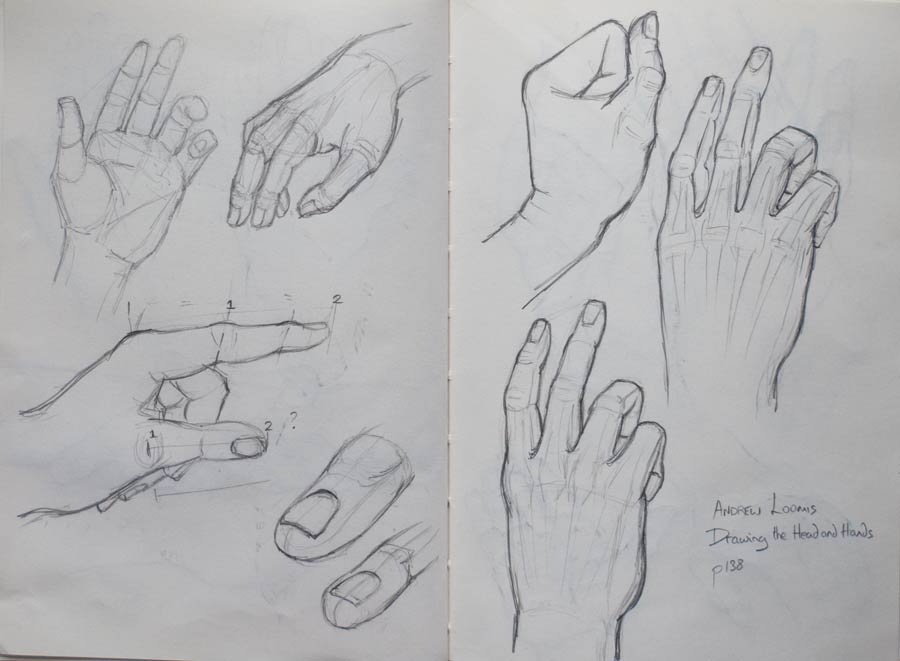 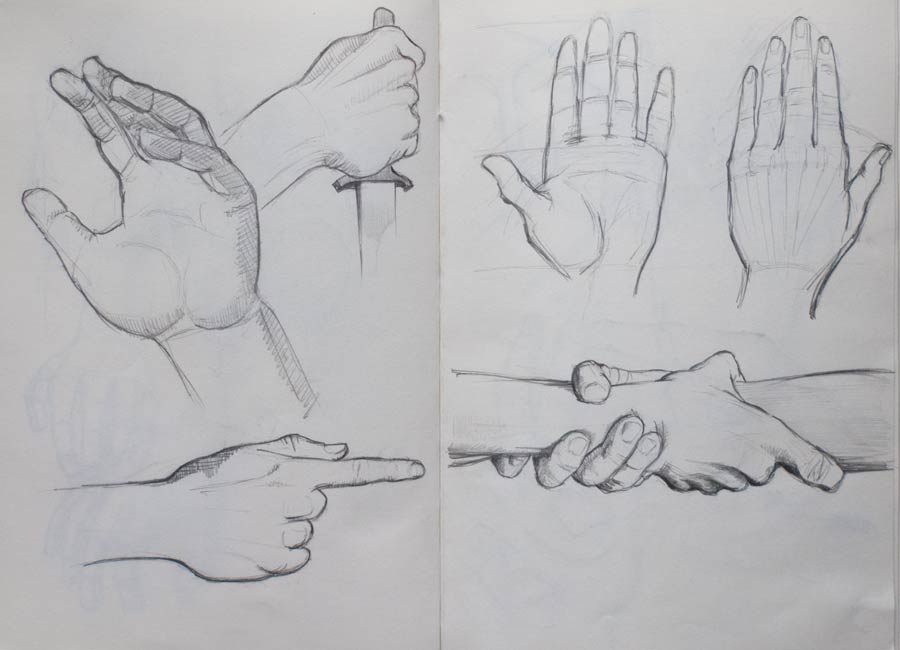 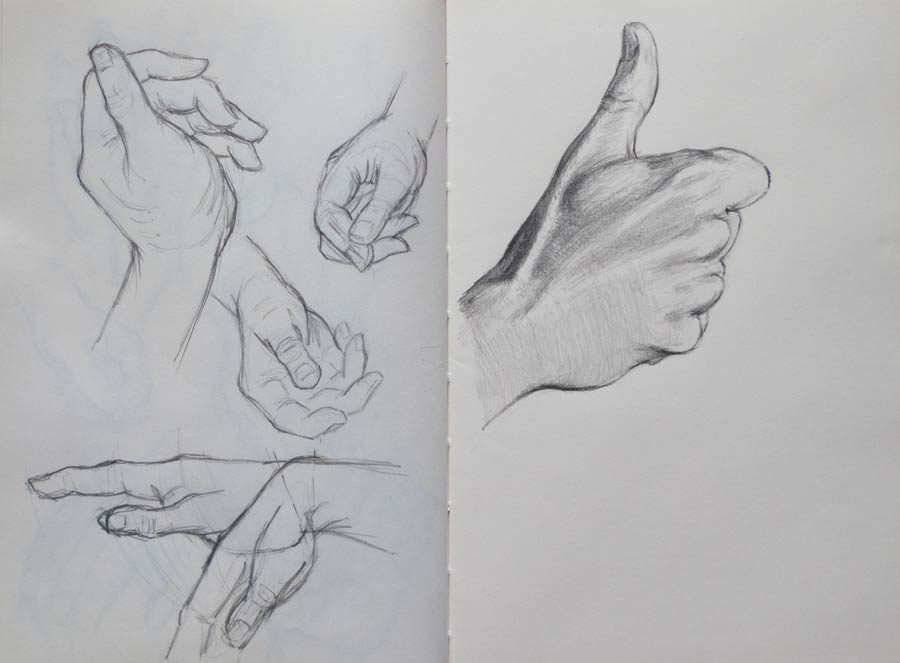 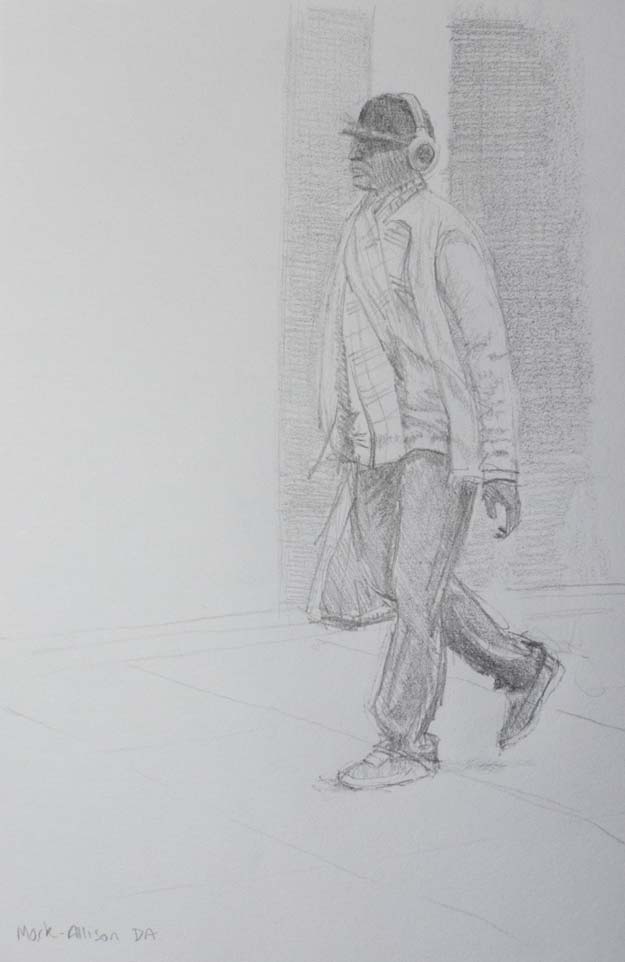 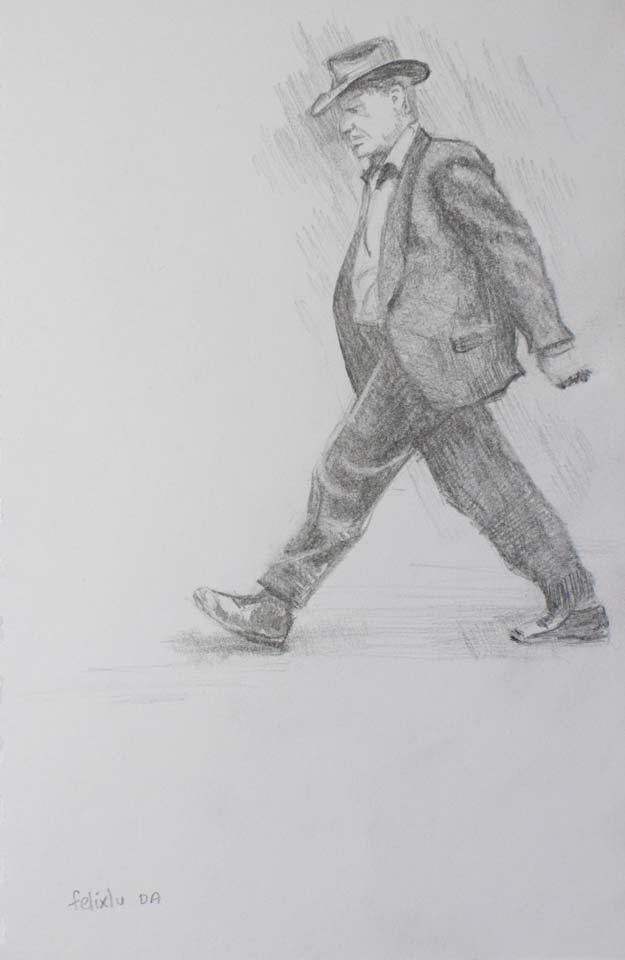 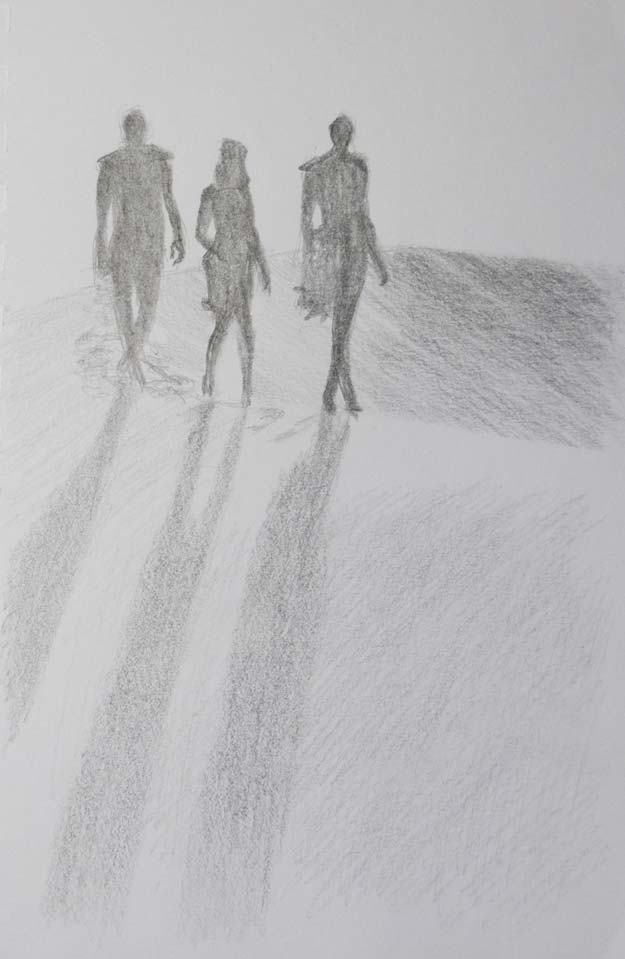 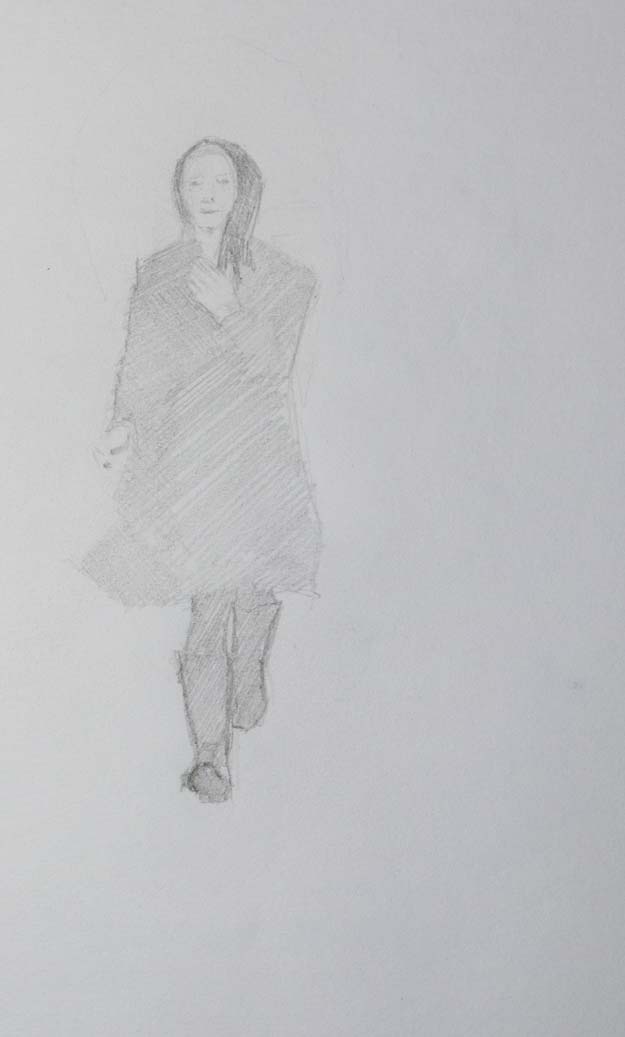 Walking involves all sorts of subtle shifts of balance: the heel tends to land towards the midline; the top of the foot splays outwards; even if there isn’t an obvious arm movement, the weight of the opposite side of the body provides a counter-swing.

I don’t know of any other way to practice sketching these poses other than from photographs. It’s hard enough to sketch someone unless they remain quite still; the slightest change in position throws off the remembered line. But it must be possible as there are plenty of artists who create scenes including action poses completely from imagination. Perhaps they made many sketches from life (or photos), and that, combined with knowledge of anatomy and human proportions, is enough to create a novel scene. 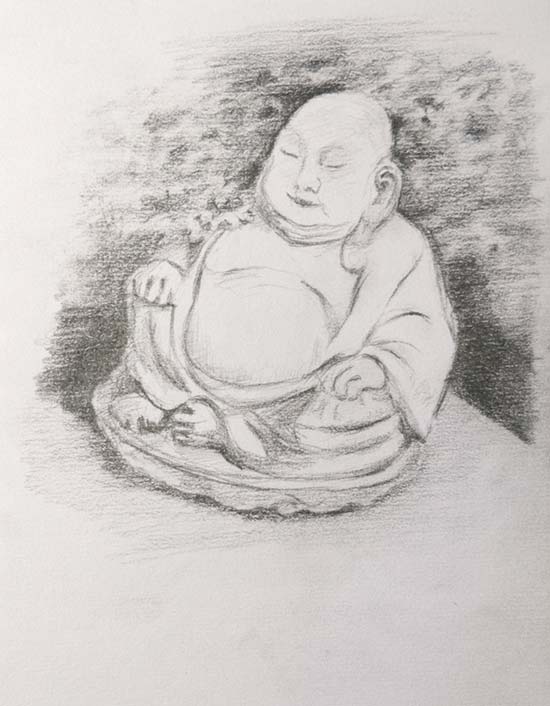 This buddha statue was partially overgrown by the box hedge, which led to the problem of how to represent the foliage without describing every leaf or drawing attention away from the main subject.

Following advice given in Barrington Barber’s The Complete Book of Drawing, only the leaves overlapping the shoulder were drawn with any detail, the others being abstracted into areas of light and shade. The theory is that one area of detail is enough to trick the brain into filling in the rest. 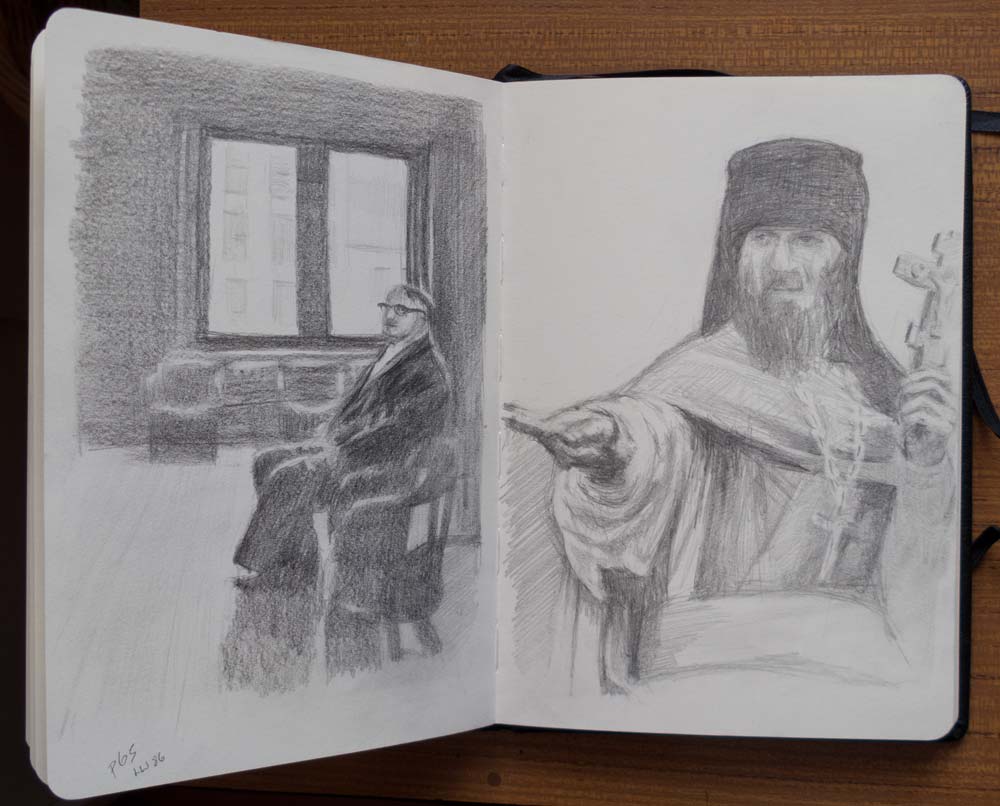 Many of these pencil sketches are drawn while sitting on a sofa with the sketchbook on my lap, not the ideal drawing position and the lighting is poor, but if I get too precious about when and where I draw then I would do very little. The mantra I hear repeated by art instructors is to draw as much as possible – theory and knowledge are fine, but we only really learn while drawing.

For the flophouse sketch I used a lead holder fitted with a soft, fat lead (Pilot Croquis 6B 4mm) to shade large areas, with my trusty mechanical pencil (Ain Stein 2B 0.7mm) used for the details. A kneaded eraser was used to pick out the highlights, such as the light reflected from the top of the chairs and the folds in the suit, and to define the chain from the shading of the priest’s robes.

The sketch on the left is from the series Bowery Flophouse by photographer John F. Conn, printed in LensWork 86; the other is an Orthodox priest on the Solovetski Islands, from The Journals of a White Sea Wolf by Mariusz Wilk. 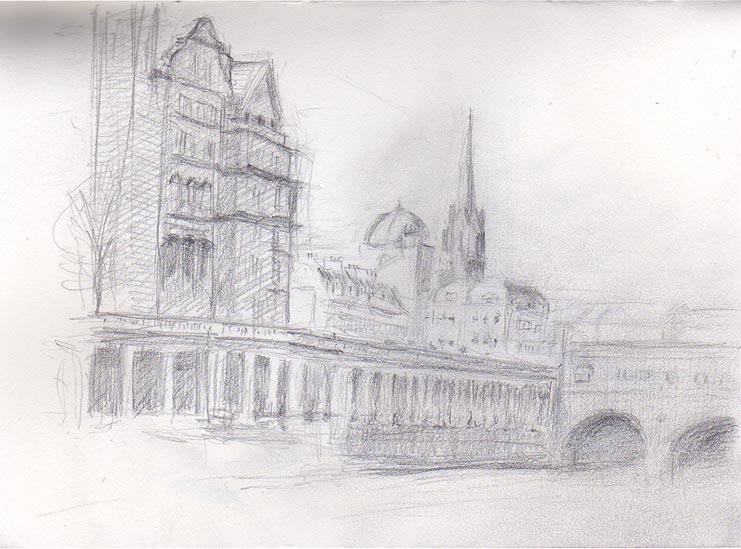 Sketching Pulteney weir in Bath, using pencil rather than going straight in with pen as I wanted to try and make the main proportions as accurate as I could. The lines weren’t ‘restated’, they were rubbed out many times, obliterated and begun again. Something wasn’t quite right about it (besides being wonky and covered in smudges): the spire and dome didn’t look right, the buildings on the left looked too short… 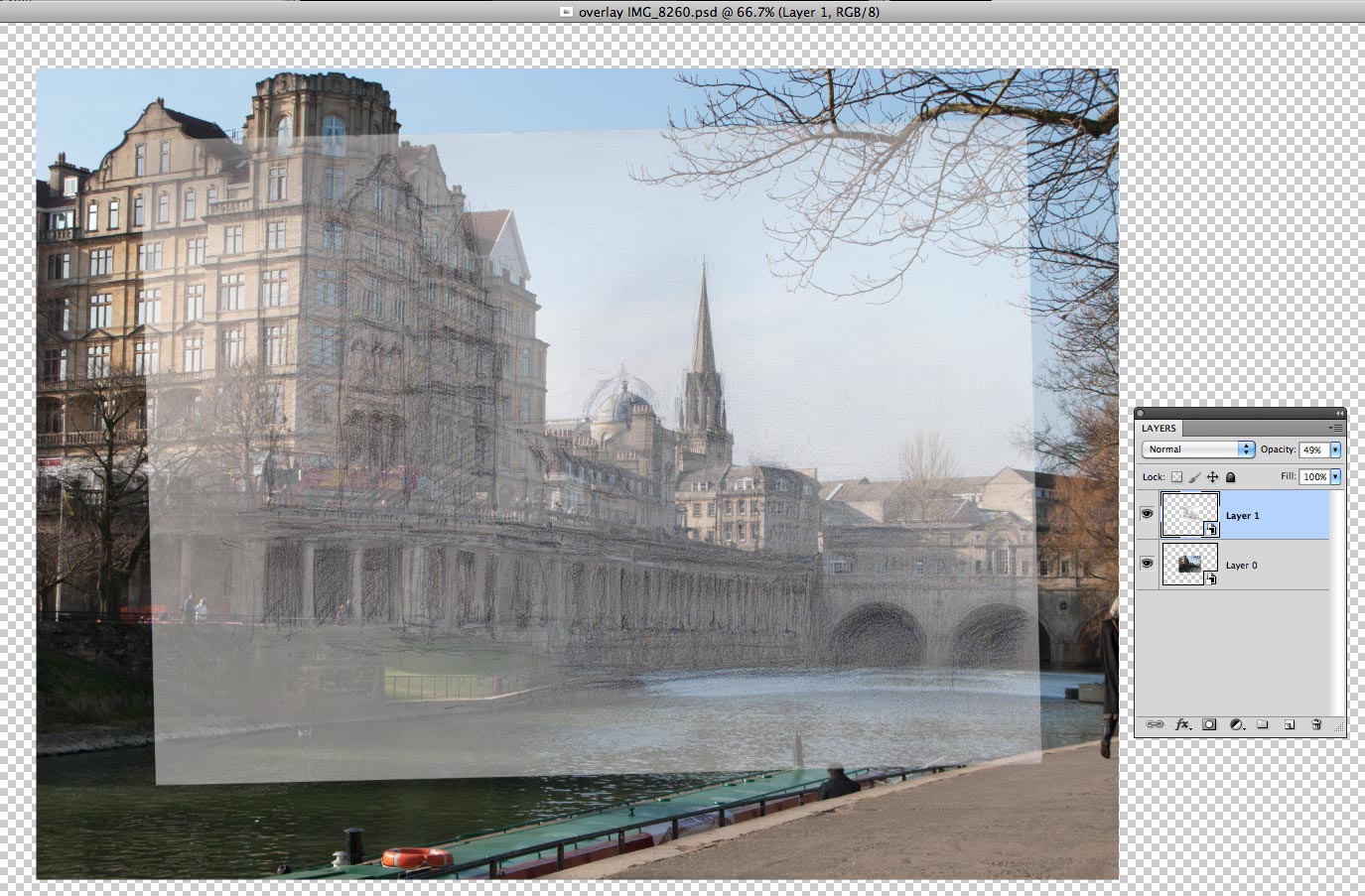 Took a pic of the scene, and with the aid of Photoshop overlaid the sketch to check proportions: The pavement railings, pillars beneath and bridge arches seem to be ok, and strangely enough the spire is about right, even though I thought that was way out. The dome, however, has turned into St Paul’s Cathedral, and there’s too much space between the dome and buildings on the left.

It took so long to do this that there was no time to add any watercolour washes. 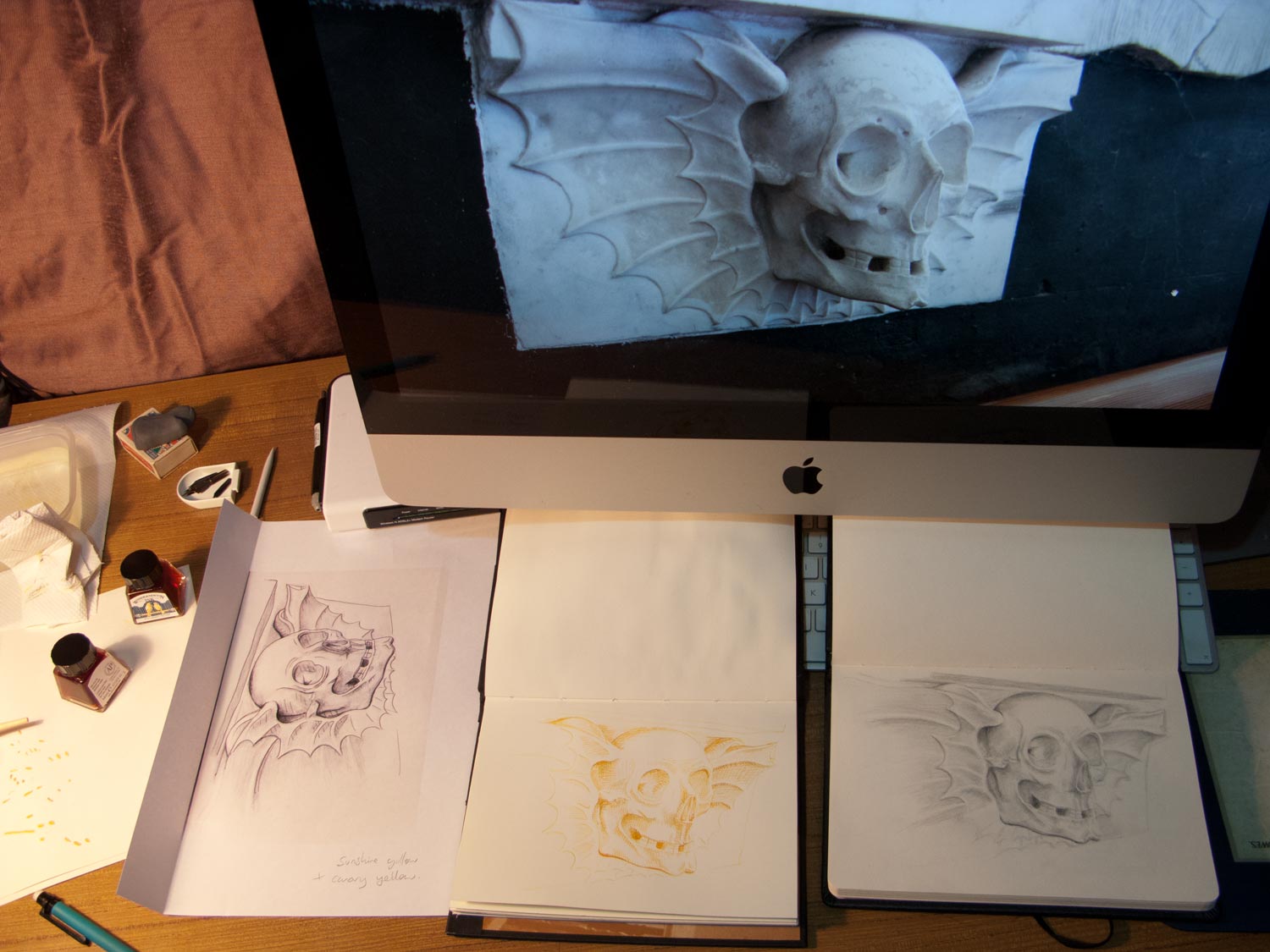 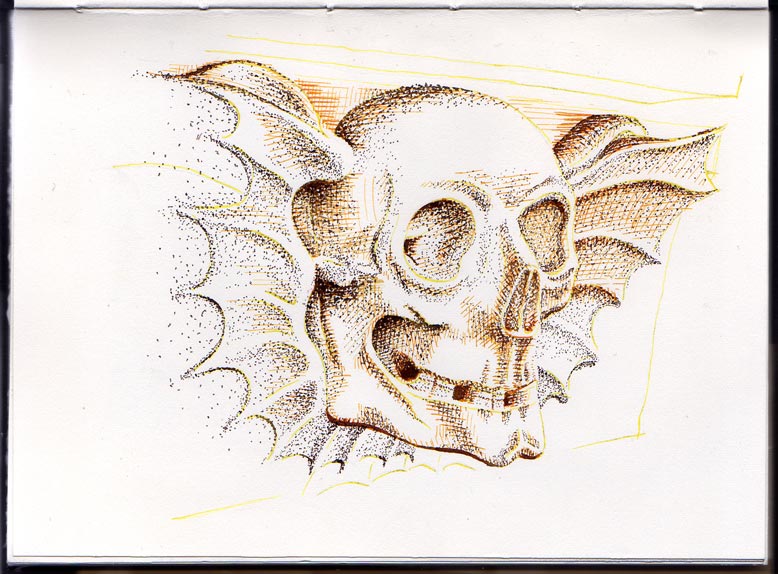 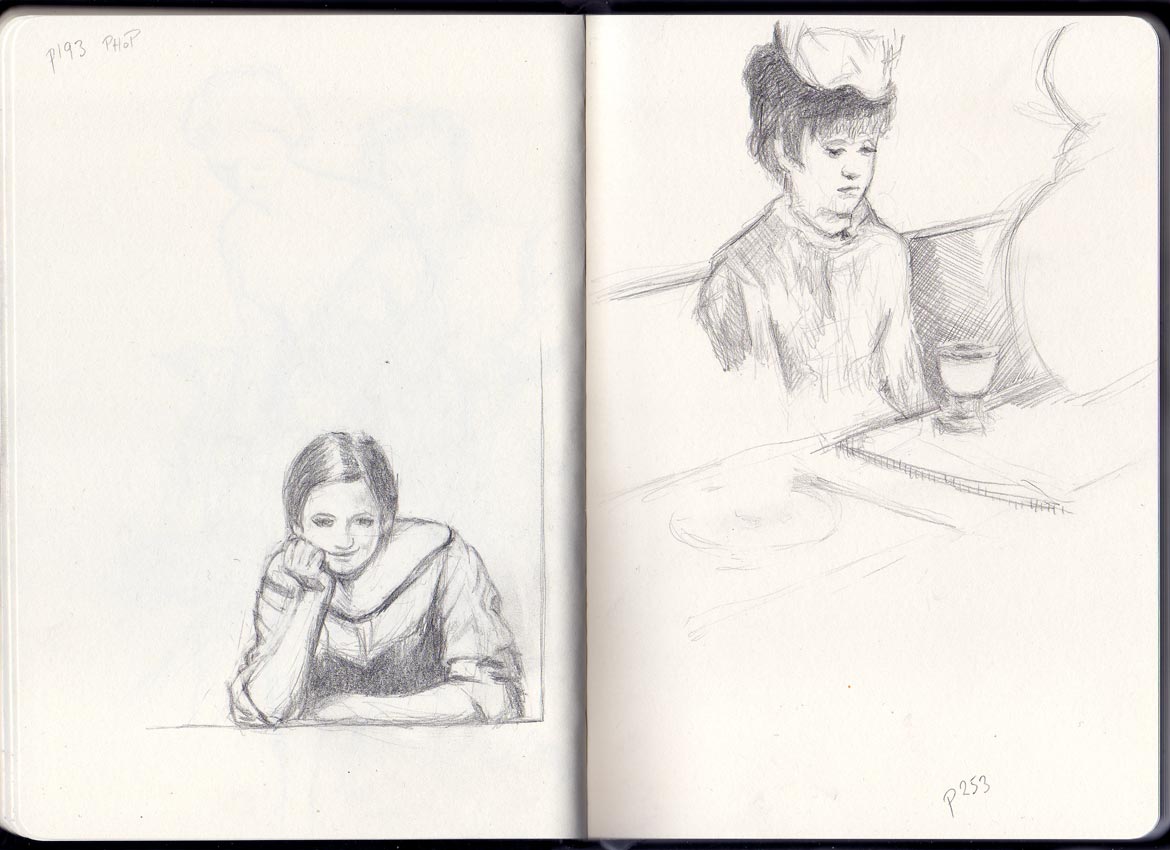 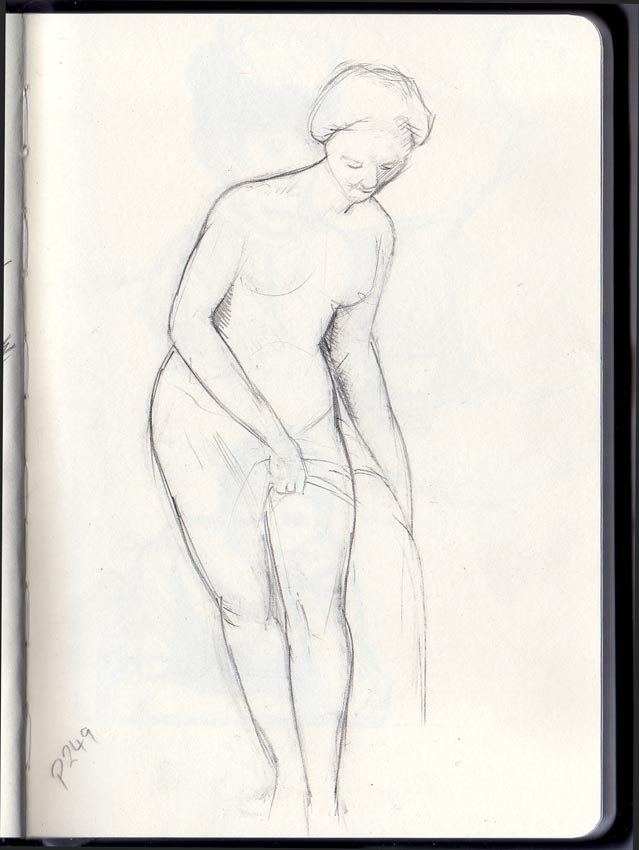 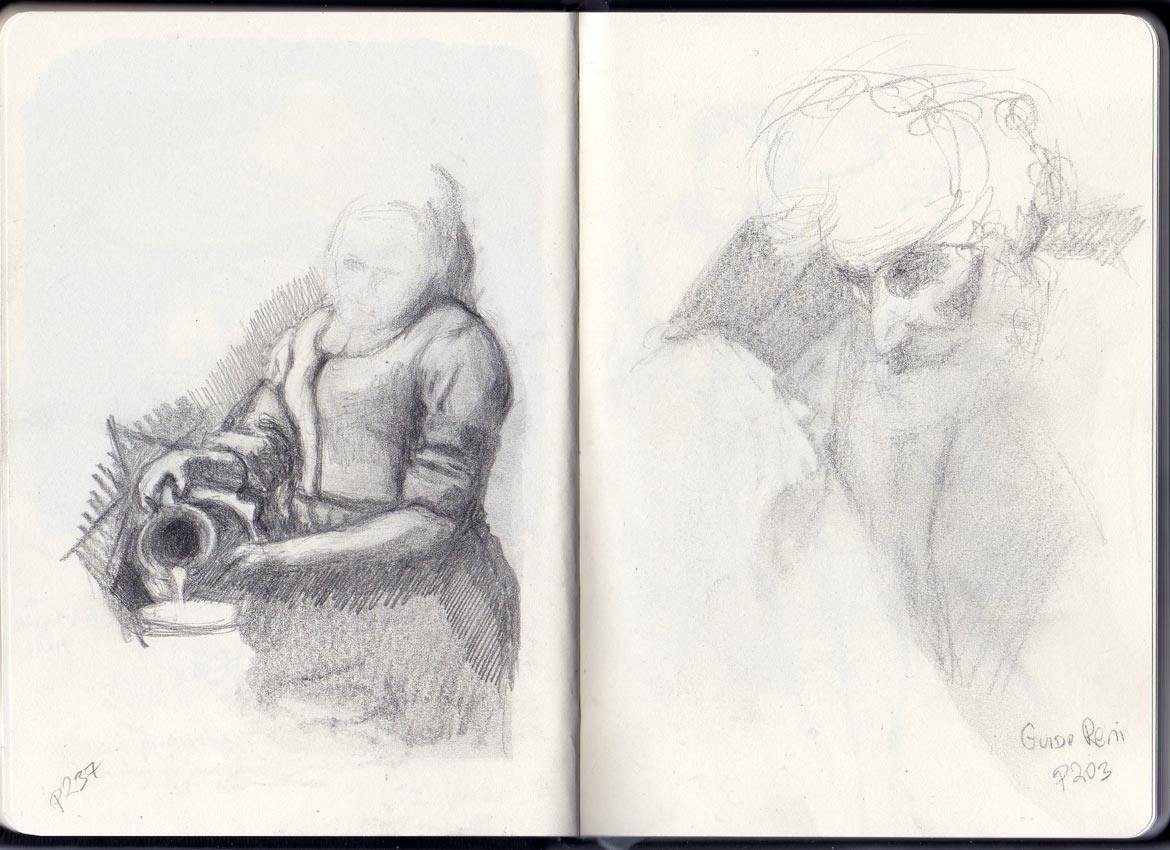 Copying pictures from an old copy of The Picture History of Painting that contains a number of rather heavily printed mono reproductions, which make practice pencil sketches that much easier as the image is already broken down into values.

It’s worth doing these copies just to feel something of the flow and graceful line that the masters managed to put on the canvas.